Chemicals in foods are a concern in the United States for many reasons.  We are allowed, even encouraged, by food manufacturers and fast-food restaurants to buy chemical foods for cheap.  The sad part is that we may pay later with our health.

The American Academy of Pediatrics has urged that chemicals currently allowed into our food supply need urgent reform for the safety of children’s health as well.

In this post, learn why we have so many chemicals in our food supply, which ones are banned across the world, and the possible short-term and long-term health effects these toxic ingredients may have on the body. Learn about foods to choose from instead of chemical-laden foods too.

Why so many chemicals?

If you were born before 1980, you probably remember buying a loaf of bread and would have to use it up quickly so it wouldn’t mold.  Now, a loaf of bread strangely won’t mold at all- for weeks.  Seems a little disturbing, no?

The change in the bread of today is new additives and preservatives. And it’s not just bread that has a new and hefty dose of chemicals.

To sum it up, the United States has very loose rules about what they allow in foods as both preservatives and additives.  A perfect example of this is the recent approval of suspect ingredients like leghemoglobin in Beyond Meat. No safety testing was required before it was released into the food supply.

The FDA approved its use before safety testing. The loophole is that the FDA allowed 30 days after market introduction for any person to file adverse effects.  So, it must be safe with no consumer objections….right?!?

Almost every country in the world has more rigorous standards for what they will and won’t allow in their food supply than ours because the chemical approval process is a breeze here.  That is why it is important to be an informed consumer.

Who is helping to whistleblow?

Some organizations have long looked out for your safety.  They continue to alert the public about the concerns of chemicals in foods.

The Center for Environmental Health is a public health watchdog that investigates chemicals for their safety.   CEH keeps an eye on ingredients and has successfully been able to prove some as unsafe, such as 4-methylimidazole (4-MEI), which was used in making Coca Cola and Pepsi, but found to be very toxic.

You now no longer find it in your drinks because of their work.

The Center for Science in the Public Interest and the Environmental Working Group (EWG) also continue to fight for our health and both disclose the many concerns about our artificial food additives and natural, but adulterated additives with their updated chemical safety lists.

But the process of getting a chemical in foods off the market is long and arduous.

And consider this: common food additives can have toxic effects on the body, especially if eaten on a regular basis.

There are not enough hands on deck looking out for our health.  The food industry is powerful and influential too, but one by one, we can change this by making an informed decision about what we buy.

The other challenge is that rarely are human health studies done before a chemical product gets to market.  Who would sign up to be part of those studies anyway?

Chemicals banned in other countries

Another way to know what is safe and what is not is to look at what chemicals in foods are banned across the world.  Good examples are GMOs and glyphosate, also known as RoundUp herbicide.

Learn more about these bans here:

GMO’s, or genetically modified ingredients, are largely banned across the world for many reasons.  One big reason is that they often use a ton of chemicals in the farming practices that go along with them.

The news can be confusing about GMOs because there is a lot of bias involved in reports. But consider this:

Also banning GMOs are Algeria and Madagascar in Africa, Turkey, Kyrgyzstan, Bhutan, and Saudi Arabia in Asia; and in South America: Belize, Peru, Ecuador, and Venezuela.

Not surprisingly, GMOs are not banned in the United States.

Another very concerning chemical that is found in most foods in the United States is glyphosate. Known as a probable carcinogen, according to the International Agency for Research on Cancer, we still allow it to be sprayed all over our foods here.

It is also banned in Sweden, Switzerland, Spain, Argentina, Brazil, Columbia, and Bahrain-and Canada starting in 2021.

Sadly, it is almost impossible to avoid glyphosate, especially in cereal and legume products, because it is so widely used in the United States.

Other chemicals and their risks

Here are their potential risks of each one backed by research.

Plasticizers and Can Linings

There are over 100 types of plasticizers according to the Journal of Food Protection.  Here are some that are of top concern. Keep in mind, these chemicals in foods won’t show up on the labels because they are used either in the production of foods or in the packaging.

These hormones won’t be listed on the ingredients, but are often used in factory farm animal production to promote growth.

Where to find these chemicals

Aside from glyphosate (which you can’t entirely avoid) and GMOs, the following chemical additives in foods may have long-term damaging health effects.

Note that additives that are banned in other countries are in bold, including the GMO ingredients.

Organic foods won’t include any known harmful additives, so the bold ingredients are only for conventionally grown foods in these groups.

Feed additives for animals that may pass along to you in their meat: ractopamine and chlorine washes.  Note that these won’t be listed on the labels, just possibly passed along to you, according to the Center for Food Safety.

Processed foods, like most breakfast cereals, have one or more additives that may raise an eyebrow about health concerns.  They include: BHT, TBHQ, synthetic vitamins, can have copious iron, and enriched flour.

They often have artificial food dyes like yellow 5, yellow 6, red 40, blue 1, and artificial flavor.  To appeal to children, they can have staggering amounts of chemical dyes.

If they are made of enriched wheat flour, they will likely contain Azodicarbonamide.

Ingredients that are either highly processed or GMO in cereals include trans fats as partially hydrogenated vegetable oil, EDTA, corn, and soybean. 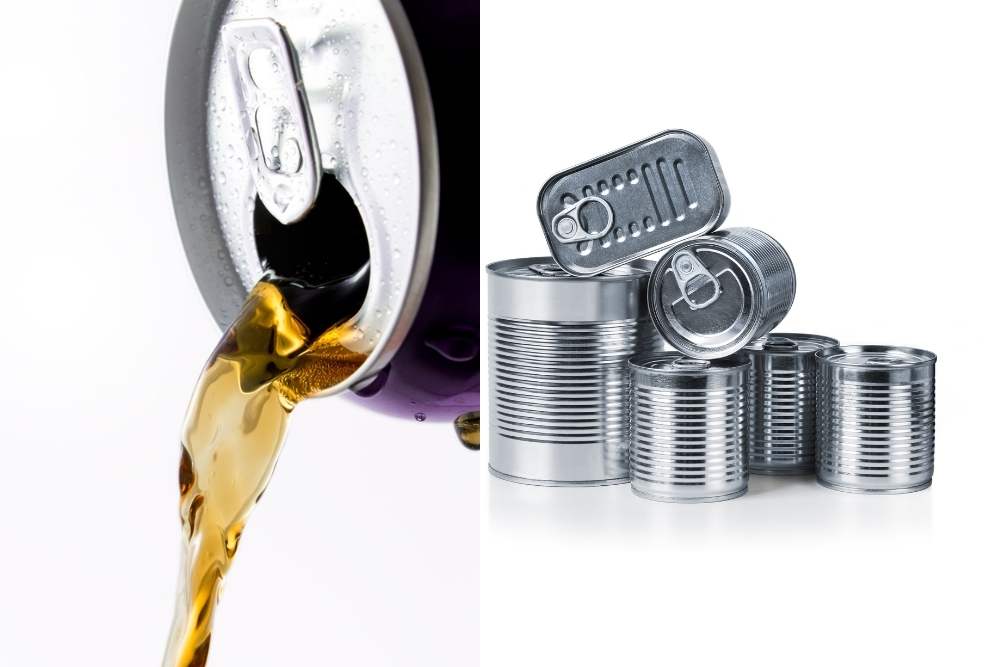 Processed foods in cans are susceptible not only to ingredients in the foods, but toxic ingredients that can be present in the cans themselves. These compounds in the can leach into the food.

Cans are often lined with bisphenol A (BPA) or polyethylene, polypropylene, vinyl, and acrylic.  Safer can linings are being developed, but the current use of BPA in cans is exceedingly high according to Science Mag.

Ingredients that may increase rates of cancer or digestive issues in canned foods and drinks include sodium benzoate, artificial sweeteners like aspartame, sucralose, and acesulfame K.

Frozen dinners contain similar dangerous plastics like BPA and phthalates, and also contain almost every known chemical additive out there if you aren’t careful.

Baked goods on the shelves, as well as packaged cookies and cake mixes, also have ingredients to look out for:

These seem like a high price to pay for convenience.

Watch out for microwave popcorn too.

Many of the chemicals aren’t listed on the ingredients because they are in the packaging including Perfluorooctanoic Acid (PFOA).

PFCs are substances that break down into perfluorooctanoic acid (PFOA).

Knowing this, popping popcorn in an air popper or on the stove seems the logical choice.

Candies are fraught with artificial food coloring and preservatives.

Perfluorooctanoic Acid (PFOA) is not listed on the candy label because it can be in the wrapper or food packaging.

Dairy products can contain the compound Recombinant Bovine Growth Hormone (rBGH), and can also contain carrageenan and artificial sweeteners like sucralose and acesulfame K, especially in yogurts and ice creams.

Best to go all-natural when indicated on labels and even organic when you can. 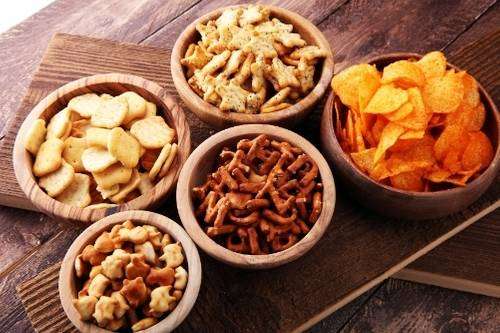 Chips and crackers are no stranger to chemicals.

These chemicals are linked to heart disease and overall risk of poor health, including Olestra, polysorbate 60, 65, or 80, nitrites, artificial food dyes, TBHQ, and BHT/BHA.

You also may ingest some Phthalates from the packaging.

Produce, luckily for us, is pretty free from harmful chemicals (except for the ones sprayed on the crops).

One concerning chemical used, however, is Citrus red # 1.  This is only used on some brands of Florida oranges but holds a similar cancer risk to other food dyes.  Citrus red #1 is sprayed on oranges to make them look brighter.

When you dine out or grab food at the gas station, consider all the additives discussed above as possible ingredients in your foods.

Additional concerns include Saccharin (in fountain diet sodas), and Phthalates from plastic bottles.

What happens when you eat a lot of these chemicals all the time?  It’s anyone’s guess.  But, as chronic disease and illnesses continue to rise, it’s best to take the guesswork out and avoid a chemical-laden diet. These chemicals can create a leaky gut, systemic inflammation increases cancer and neurological disease risks, and anyone’s guess in terms of health issues.

With all these chemicals in foods, though, is there anything left that is safe to eat?

The biggest thing you can do to help get chemicals out of your food is by cooking and preparing foods that are as close to nature as possible. This means buying fresh foods without packages and labels, buying fresh grass-fed meats and eggs from local sources, and fresh produce.

Production of some ancient grains, like Kamut, don’t allow chemicals in their production, so they are a good bet for pasta or bread too.

For grains, cereals, and bread, choosing organic is the only way to go.  This is because these banned chemicals in other countries are not allowed in organic chips, crackers, or bread.

By choosing organic dairy products, you also forgo any risk of BGH.

I realize these are sometimes more expensive choices for many, so just do the best you can when you can. These days, organic prices are very competitive in most markets.

Consider restoring your gut with a gut-healing diet and using supplements, such as soil-based probiotics to help improve your health from years of chemicals in foods too.

Awareness of chemicals in foods is the first step to making informed decisions about what you put in your body.  Avoid chemicals when you can, especially the ones highlighted in bold above.

By choosing less processed foods, USDA organic foods, and eating foods close to nature, we are, one by one, taking back the power of our food supply and our health.