Is Quorn healthy or unhealthy? Quorn products make the news, but not always in the best light.  Without a doubt, you may be second-guessing whether you should eat them or not.  In contrast to headline scares, what is the truth about this protein called mycoprotein, aka Quorn?

Another important question: how does Quorn stack up against meat and other plant-based meats?

Quorn is now taking a center stage in the world of mock meats, so in this post, let’s take a deep look into its facts.

Quorn is the only registered trademark brand of mock meats on the market that is made from mycoprotein.

But, what is mycoprotein, you may be asking?

Mycoprotein is a natural protein derived from a fungus called Fusarium venenatum. This fungus is then fermented to form mycoprotein, a similar process to that of making yogurt or beer [R].

Fusarium venenatum is a microbial protein, in other words.

Mycoprotein was first discovered growing naturally in a field in England in the 1960’s.  It is not a high-tech, processed protein like some people think.

The first mycoprotein for sale was in 1985, and now 90 Quorn mycoprotein products are available on the market.

While some people cringe at the idea of eating fungi, you are eating fungi anyway without knowing it.

After learning about some of the benefits and risks, you can make an informed decision about whether or not you should eat Quorn.

Every day, you are likely eating a wide assortment of fungi.

Don’t worry, this is usually a good thing, unless your body is out of balance.

It should be noted that some strains of fungi are not healthy while others are very healthy.

Healthy strains of fungi are part of our microbiome too.

Fungi in our diet comes from:

Mycoprotein is a type of fungi from the group called ascomycota.  Some examples of fungi in this family are very sought after.  These include the family of fungi also known as truffles, morels, and yeasts for bread making and beer making.

When the mycoprotein is growing, it is fermented, much like the fermentation of kombucha or beer.

Mycoprotein is a type of mycorrhizae fungi, which simply means that it grows underground.

Because it is a natural food, there is nothing inherently bad about mycoprotein.

The short answer is yes.  Plants can’t make vitamin B12, but vitamin B12 is found naturally in fungi like mycoprotein.  Quorn also contains antioxidants like selenium and a high amount of nutritious fiber, protein, and amino acids.

Quorn nutrition per typical 100 grams or around 1 cup:

Is Quorn healthy for its type of protein and amount of amino acids?

Quorn protein is very similar to the protein in meats and dairy because it has all the essential amino acids that are highly absorb-able and bio-available [R].

This makes Quorn stand out because even soy and legumes are missing amino acids.  Quorn also has almost the same amount of protein as meat and dairy as well.

Pros of Quorn over Impossible Burger

There are some clear benefits of Quorn over other plant-meats, including Impossible Burger.

As examples of the benefits of Quorn over Impossible, consider these facts:

Undoubtedly, fungi in plant-based burgers is everywhere, whether you know it or not.

It is important to note that both the Impossible Burger and the Beyond Burger also contain fungi as yeast.

Many foods on the market today do contain one or more types of fungi derivatives as flavoring agents.

In other words, Quorn is less processed than Impossible burgers.  Additionally, all the major competitor plant-based burgers all have fungi in them too.

Is Quorn healthy in comparison to Impossible Burger?  Quorn has a couple of disadvantages, but mostly has advantages as described above. A few disadvantages include:

How does Quorn compare to sustainable meats, such as grass-fed beef?

As you can see, foods are complex, but as far as nutrient profiles go, it is hard to beat natural grass-fed beef.

Fungi have many beneficial nutrients, antioxidants, and immune advantages.  You may have heard of one called beta-glucan.  Beta-glucans in fungi, including Quorn, may stimulate immune function.

This includes both macrophages, or innate immunity, and adaptive immune response, including T-cells and antibodies [R].

Certain kinds of fungi have proven beneficial and serve to function as a treatment alongside conventional cancer treatments.

What else may mycoprotein do?  A lot, according to my recent review of medicinal mushrooms.

Here is an overview of possible mycoprotein benefits.

Does Quorn help with weight loss?

A couple of research suggests that it may.

Eating mycoprotein resulted in less food intake and a reduction in insulin compared to people eating chicken in a small clinical study of 55 healthy volunteers [R].

In another study, eating Quorn at lunch resulted in people eating an average of 18% less calories at dinner compared to equal amounts of chicken [R].

While larger studies are needed to confirm these findings, it seems like Quorn may help people with appetite control.

Some kinds of fungi are known to help support healthy digestive processes, including chaga.

Fungi such as Quorn may reduce symptoms of colitis and improve overall digestive health because of their high fiber content.

This is because the fiber is converted to the primary intestinal fuel called short-chain fatty acids (SCFA) including butyrate [R].    Quorn contains a special kind of fiber called beta-glucan.  This type of fiber is especially healing for the body and digestive tract.

A common concern for people with digestive issues is gluten intolerance.

Some Quorn products contain gluten, but 5 types on the market today are gluten-free.

For example, beta-glucan intake is linked to lower rates of cancer, may reduce psychological distress, and may also reduce chronic fatigue syndrome [R].

Mycoprotein such as Quorn is rich in both beta-glucan and chitin (1.5 g of chitin and 4 g of beta-glucan) [R].

While studies remain small, research experts suggest that fungal sources of protein like Quorn may even help modify the immune aspects of heart disease [R].

The compounds activated by beta-glucan fibers include free fatty acid receptors (FFAR).  These receptors are linked to better metabolic and immune regulation.

Type 2 Diabetes results in elevated blood glucose numbers after meals as well as elevated post-meal insulin levels.  Much of the damage to the body from diabetes is related to glucose and insulin spikes related to meals.

As fungi research continues to grow, we have more evidence of its benefits for the whole body, including hormones and glucose. Here is the research we have about glucose, insulin, and mycoprotein so far.

Bottom line:  mycoprotein may be one of many foods that help reduce the burden of diabetes.

Is Quorn Healthy for Cholesterol?

Mycoprotein is rich in beta-glucan fiber and other kinds of fiber, which is well-known to reduce LDL cholesterol [R].  Here is the caveat:  only 2 small studies have directly measured the effects of mycoprotein on cholesterol levels.

Bottom line: although the studies are small,  the research we have so far is in favor of mycoprotein being able to reduce LDL cholesterol levels and it may even boost good cholesterol.

As with any food, allergic reactions are possible with eating Quorn.  Quorn allergies may be more likely to be immediate than some allergens, such as the reactions similar to peanut allergies.  To put this in perspective, in 2017:

Still, people who have sensitivities to any molds, fungi, or mushrooms should avoid Quorn.  If any digestive discomfort or allergic symptoms appear, make sure to seek medical help right away.

The Center for Science in the Public Interest has brought to light many self-reported cases of mycoprotein allergies.     Many Quorn products also contain egg and wheat, which are other possible allergens [R].

All Quorn varieties are considered vegetarian, but several vegan Quorn products are available too.   They include anything from Quorn “Burgers” to “Fish” sticks: 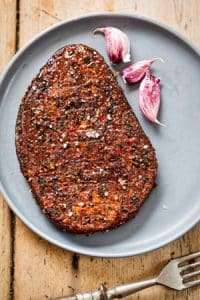 You can simply substitute Quorn crumbles for meat, beans, chicken, or fish in your recipes.

For more ideas, try these:

And also this cookbook:

Quorn is much less processed than most mock meats on the market today and may have its own set of health benefits. This is because it has beneficial fungi.

Are you sensitive to gluten or have celiac disease? Make sure to choose Quorn products that are gluten-free. You can choose vegan Quorn if you are sensitive to eggs.

If you are allergic to any type of mold, fungi, or mushroom, you should avoid eating Quorn.

Plant-based proteins are a viable option for many people because they can be inexpensive and fit into many people’s idea of sustainable foods.

Keep in mind, Quorn is produced in England and Australia.

Part of the carbon footprint of a food is how far it is away from your table.

Are you concerned about the welfare of the planet?  The most important things you can do is eat food that is grown closest to home, grown in sustainable ways, and reduce the amount of food you waste each day.

My family didn’t notice the difference in taste between regular chicken nuggets and the Quorn Chicken (Meatless)  Nuggets. They actually loved the taste.

I’m a natural skeptic of fake meats because they are often highly processed and contain ingredients from all ends of the globe.  I actually feel a quite a bit better about eating Quorn.

This is because Quorn products contain simple ingredients and are less processed than many plant-based meats.

Regardless, I will still enjoy a close-to-home, sustainable, grass-fed beef burger or grass-fed steak when given a choice.  Here is a book I like about that topic: